First of all Happy Ganesh Chaturthi to you all!

Today is a very auspicious day in the Hindu calendar celebrating our beloved Lord Ganesh who is known as the 'Remover of all Obstacles' and the God of Prosperity. This is the beginning of a 10 day festival in honour of Lord Ganesh (son of Goddess Parvati and the God of all Gods, Mahadev (also known as the destroyer of evil). Private households and communities get together to make Ganesh statues from clay and it ends with these (generally) massive statues of Ganesh being paraded through the streets in India with song and dance and then finally, immersed in large water bodies such as the sea or ocean.

So, in honour of this auspicious festival, I am going to share the recipe for Drumstick Curry/Saragva nu shaak/Shektani sing nu shaak (one of my favourites): 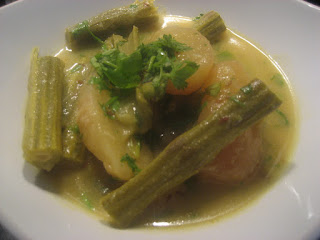 4 long drumsticks (they are generally 40cms long) - please ensure that when you choose them, they are not exceedingly bumpy and that they are not limp - essentially choose the ones with a vivid green and smooth skin and the ones that are younger in age (the older they are, the harder and bumpier they are and the more bitter they will be)

1. Wash the drumsticks and cut them into 3 inch long lengths. Then boil them. Keep the water aside from boiling the drumsticks. Once boiled, remove them from the water into a separate bowl to prevent them from over cooking. 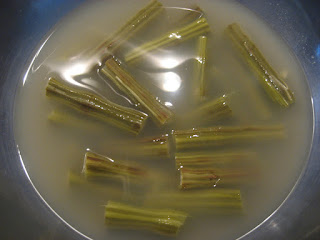 2. Wash the potatoes and boil them well until you can easily pierce a knife through them and peel off the skins. Then cut them in half. 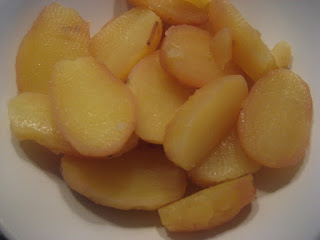 3. In a large saucepan on the hob, heat the oil on high heat and add in the cumin seeds once the oil is hot enough.
4. Once the cumin seeds start to brown and pop in the pan, add in the asafoetida. Lightly stir.
5. Then add in the chickpea flour and turn the heat to a medium-to-low flame immediately.
6. Stir the chickpea flour continuously until it starts to go a light pinkish in colour.
7. Then add in the semolina and mix well again until it is pinkish in colour. (Of course, the chickpea flour will darken further in colour but be careful not to over cook it otherwise the dish will taste bitter.)
8. Add in the saved boiled water from cooking the drumsticks, the boiled potatoes and also the cooked drumsticks into the large saucepan.
9. Turn the flame to a medium-to-high heat (more on the high side) and stir well to combine the flour into the water to create a slightly thick gravy from the water that has just been poured in.
10. Add in the rest of the ingredients from the ingredients list above in the order shown. Mix well. 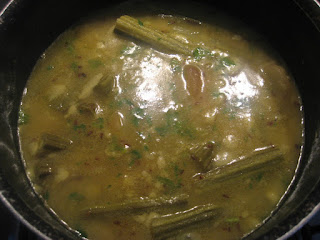 11. Turn to a low heat and cook on low heat for 15 minutes to simmer. You can cover the saucepan for optimal results.
12. Add in the 2 tbsps coriander at the end to garnish.

So there you have it! A delicious new recipe for you to try ... I hope you savour the shektani sing/saragva nu shaak!