Today I will share a favourite recipe of mine which originates from Gujarat by the name of Undhiyu. Undhiyu is a complex, mixed vegetable dish, very typically cooked in earthen pots and underground. This gives it a distinct earthy flavour.

However, the recipe I will share is cooked on the hob in a pressure cooker or a deep saucepan since the traditional facilities are not available to us :) It is also not exactly an undhiyu but it is very close to that because I will be using a lot of the base vegetables that are typically put in that dish and the taste will be very similar in style.

It certainly is a delicious dish that never fails to tantalise the taste buds so here it is: 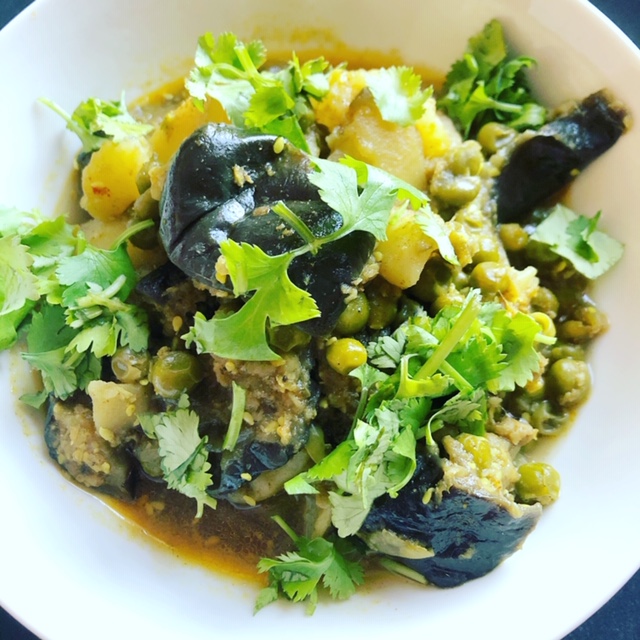 5 medium-sized white potatoes (washed, peeled, washed again, and cut into 4 equal pieces, (halved and halved again))
2 aubergines (washed, ends cut off, washed again, cut vertically into 4 long pieces and then each of those 4 pieces chopped into 2 inch length(ish) pieces)
3 cups of peas (I like to use frozen petit pois but you can use fresh too)
1 heaped tbsp fresh garlic (washed, peeled and grated)
1 heaped tbsp fresh ginger (washed, peeled and grated)
2 heaped tbsps desiccated coconut
2 heaped tbsps white sesame seeds
2 heaped tsps green chillies (washed and ground to a paste)
1 heaped tbsp salt
1 heaped tsp red chilli powder
1 tsp turmeric powder
2 heaped tbsps dhana-jeeru (cumin-coriander powder)
0.5 tsp garam masala powder
1 level tsp granulated sugar
1 pinch sanchoro (Himalayan rock salt) / kala namak
2 tbsp sunflower oil
(Phase 2) 1.5 cups cold water (American cup measure)
For the tarka:
3 tbsps sunflower oil
1 tsp cumin seeds
0.5 tsp ajwain seeds
1 pinch sanchoro (Himalayan rock salt) / kala namak
1 pinch asafoetida
Method:
1. In a large dish, mix all the ingredients in Phase 1 properly so that the vegetables are well coated with the spices.
2. Heat 3 tbsps of sunflower oil on a medium to high heat in a pressure cooker on the hob.
3. Add in the cumin seeds and sanchoro and heat until the cumin seeds start to look golden in colour.
4. Then add in the ajwain seeds and asafoetida, quickly followed by the ingredients from the dish in Phase 1.
5. Toss the vegetables well in the pressure cooker.
6. Add in the water from Phase 2 and mix the ingredients well once more.
7. Seal the pressure into the pressure cooker by closing the lid tight and place the whistle on the top.
8. Turn the flame up to a high heat without enabling the flames to lick the sides of the cooker. The flame must cover the base of the pot only.
9. Cook until the whistle sounds twice or for 20 minutes. 20 minutes on a high flame worked well.
10. Once cooked, do not open the pressure cooker until it has cooled down completely and the pressure has been completely released from the cooker. It is highly dangerous to open the cooker when it is hot.
11. Once the pressure cooker can be opened, serve the undhiyu style mixed vegetable curry with chapatis or naan bread.
'Til next time ... enjoy!
Bon appetit! xx